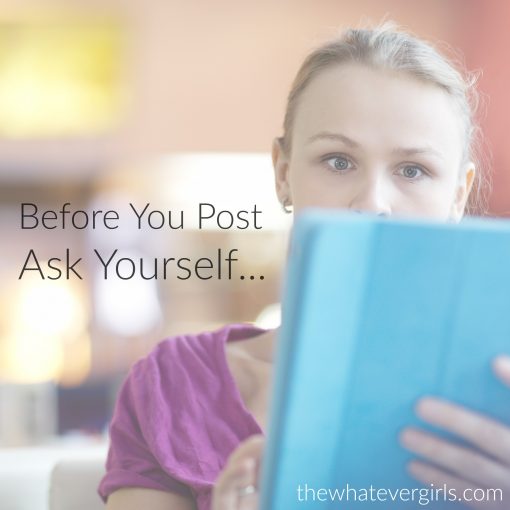 Imagine you are standing in front of 500 people. There are 1,000 eyes watching you.   With all of their attention focused on you, would you start saying things like W#%, L^%@O, or any other four-letter words that would make your grandmother’s jaw drop? Would you get into a seductive pose? Would you pick a person out of the crowd and bully them in front of all those watching you?

I would like to believe that if you found yourself in that situation you would be very careful about what you said or did in front of those 1,000 eyes. Can you imagine what the crowd would think if you bullied someone in front of them?

I recently spoke to a friend who had asked her niece similar questions. When her niece said, “no”, my friend shared some wise words with her that I want to share with you.

“If you wouldn’t say those things in front of a bunch of people, then why would you say it on Facebook?” She asked.

Just because you can’t see the people who are looking at your photos or reading what you post, doesn’t mean it isn’t a reflection on you.

In front of a crowd, you would see people’s brows clinch in horror or you might even hear some gasps from the people watching and listening to you. Behind the computer, phone or iPad there is a false sense of security that anything goes because no one is really watching.

That is not the case at all.

Just because you can’t see the looks or hear the gasps, people really are watching you, and what you post on social media is a reflection of who you are.

My friend is the wife of a police officer and when she shared with me what she told her niece, there was a detective and crime scene investigator in the conversation with us. The detective shared with me that it is amazing what law enforcement can find on the Internet. It is one of the first places they go when investigating a crime. He said if he can see what is out there, so can colleges and future employers.

So let’s start over.

You are sitting alone in front of your computer. You can’t see who is watching you but there are several sets of eyes that see what you are posting. Anyone who looks at your post has their attention on you. Would you say things like W#%, L^%@O, or any other four-letter words that would make your grandmother’s jaw drop? Would you get into a seductive pose, snap a photo and post it? Would you bully one of your peers for all those on social media to see?

Before you post something on social media ask yourself if you would be comfortable saying or doing it in front of a crowd, think about and then delete it, if needed.