Apps and websites such as Kik, Snapchat, and teen dating sites such as MyLOL, are filled with both innocence and harm.  And it’s possible that someone who starts with innocent intentions can land smack dab in the middle of a treacherous danger zone.

Some of our teens who are using these forms of social media are able to use them without sending and/or receiving inappropriate pictures or meeting older men or engaging in inappropriate conversations.  Some of them who find themselves in dangerous situations are equipped to handle themselves appropriately.  They know how to get out and get away.

But some of our teens only *think* they know (or they really don’t know at all) , but before we know it, there is a messy situation at hand. 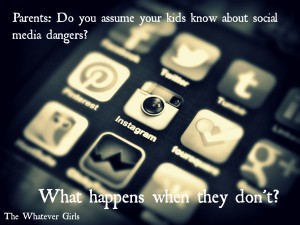 Here’s the point: We need to understand the traps of social media even better than (or at least before) our children do.  And as best as they can, our children need to at least learn to respect why we are so interested in their online endeavors.

Before we delve into the pros and cons of some of the social media out there that teens (and some tweens) use regularly, let’s think about how we (living, breathing, real parents) are communicating (actually speaking words) with our kids about the Internet and all these apps.

Sometimes, as parents, we are guilty for assuming that our kids know things.  For example, the other day, my 9 year-old wanted to ride her bike “just around the block.”  She had heard the term, but didn’t know the very specific meaning of those boundaries.  I assumed she did.  Little did I realize, in her mind, around the block meant “around the neighborhood.”  Let me tell you, the short five minutes she should have been gone turned into an agonizing fifteen as I searched the streets for her.

Do you assume your kids know the general rules and landscape of the Internet?  But here is the thing: Even if they do know, they still need to hear it from you that these safety precautions are important to YOU and are not to be easily disregarded.

Let’s think for a moment about delivery: I don’t have a teen yet, however, I spent many years working with our church youth group and I have lots of friends who do have teenagers.  It’s a pretty well-known fact that teens don’t like to feel controlled, yes?  The truth is, you probably don’t like to feel controlled, either.  This conversations about the dangers and traps in social media isn’t about establishing control of your children.  It’s about establishing conversations and helping your child understand that you want to help them navigate these social media waters.

Honestly, I think it’s a super tricky situation.  In my mind, I want to build a fortress around my girls so that no harm will ever come to them. I want to set boundaries and expectations and have consequences when they are crossed or unfulfilled.  But at the same time, I also know if I come across as a military dictator, I’m just asking for a major mutiny.

Before we go into the specific research about these social media apps, let’s start talking with our children.  Let’s ask them questions about what they’ve already gathered from being out in that world.  What questions do they have?  Need some starters?  What about these:

What have you heard about Snapchat, Kik, etc?

Have you used it?  Have your friends used it?

Do you think someone might ever pretend to be something/someone they aren’t? How would that change your view of them? Of the app? Of social media?

Has anything ever happened through one of these apps that made your stomach queasy?

Sometimes I get scared about the bad things that can happen out there.  Can we have a conversation about some boundaries that will keep our family safer?

After this last question, it might be a good time to come up with a type of covenant to which everyone in the family can agree (this means moms and dads, too!).  Here is a great sample one, but I think it might be really beneficial for everyone to pitch in to create one unique to your family.  This way, it doesn’t seem like rules handed down from on high, but rather a collective, collaborative, interactive process where everyone participates on a meaningful level.

Come back next month and we will begin decoding some of these social media outlets.  If you have a particular one not mentioned above that you’d like more information about, please let me know in the comments.