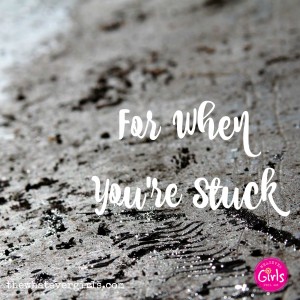 Muck boots.
Muck boots and laughter.
Muck boots, laughter and deep mud.
I can still hear the sound of my daughter and her best friend stomping in the mud on a cold November day. The rest of us enjoyed the warmth of the bonfire as we listened to the Apple Cup football game on the radio.
Those two were having so much fun in the deep mud. However, the fun came to an end when they got stuck. The more they panicked trying to get out, the more stuck they got. At the bonfire we could hear the sound of the girls yelling for their dads to help them.
Both of the dads ran quickly to help the girls. They carefully positioned their feet so they would not get stuck themselves. They had to pull as hard as they could to get the girls out of the mud. One of the girls lost her boot because the mud refused to loosen its grip. Their dads were stronger than the mud that had its grip on them.
What started out as fun, led the two girls to be trapped in a place that only their fathers were strong enough to pull them out of. As a teen, you may have chosen to play in the mud in a different way. Sexting, drugs, and drinking are just a few ways you can find yourself stuck in a mess you never wanted to be in.
If you are stuck in a place you don’t want to be, call out to God and your parents for help. No matter how much mud you may find yourself in, God can pull you out of it and clean you off. Tell Him you need His help and He will be there. He will make you white as snow when you ask Him for forgiveness. Your parents can also help you. Go to them and be honest about what is going on. You might even be surprised to find out that your parents may have stepped in their fair share of mud too.
Don’t ever think there is no way out of the mud. Cry out for help. Your father in heaven will come running just like the dads did when the girls yelled for help. Psalms 40:2 says, He lifted me out of the slimy pit, out of the mud and mire; he set my feet on a rock and gave me a firm place to stand. Believe He will lift you out of the mud, out of the muck and mire, just like scripture says. Also, be honest with your parents and trust in the love they have for you.
Be careful what you step in, even with your muck books on.
Share
Pin
Email
Print