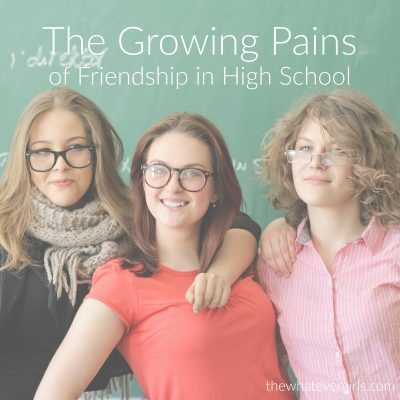 I always heard that your friends will change in high school and that you most likely won’t have the same friends when you graduate, but I never thought that would happen to me. Breaking news: I was wrong.

I wish I could have been more prepared for the growing pains when it came to losing friends or seeing friends change. I am 19 years old now – which is apparently makes me an adult – and I still struggle with it today.

If I am being completely honest, I enjoyed middle school a lot more than I enjoyed high school and that is because of my close group of friends I had back in middle school before we all changed. Granted, my friends were not the only people who changed, I did as well throughout high school.

But, I had two people I considered best friends that chose a different social life than me with partying and associated themselves with a new group of people, so we gradually grew apart. That was the hardest growing pain for me because I could not wrap my head around wanting to get high or drunk instead of eating pizza and watching Netflix.

I also have had friendships just grow apart since graduation, I still consider them a friend but I just do not see them or talk to them as much as I would want to. This is also hard because I never thought this would happen to me, I was the naive friend that thought we would stay close even when we chose different colleges.

High school changes people; there is no way around that. It can change people for the better or for worst, you just have to know that it is normal and that you are not the only one going through these situations.

I am not going to lie, losing friends stinks. I mean it is really like a breakup, just with your best friend instead of a boyfriend. But, you deserve better and new friends will come along the way whether you believe it or not.

It is hard to be a girl living in this world and not having a permanent best girlfriend by your side to share it with, but maybe you can beat these odds – I sure hope you can.

You do not have the settle for friends after you lose a few here or there, just like you should not settle for the first boy that talks to you. Your friends should prove that they deserve your friendship and not take your time for granted.

I look at it as I want quality rather than quantity. In other words, would you rather have four quarters or a hundred pennies?

Do not be misled: “Bad company corrupts good character.” – 1 Corinthians 15:33