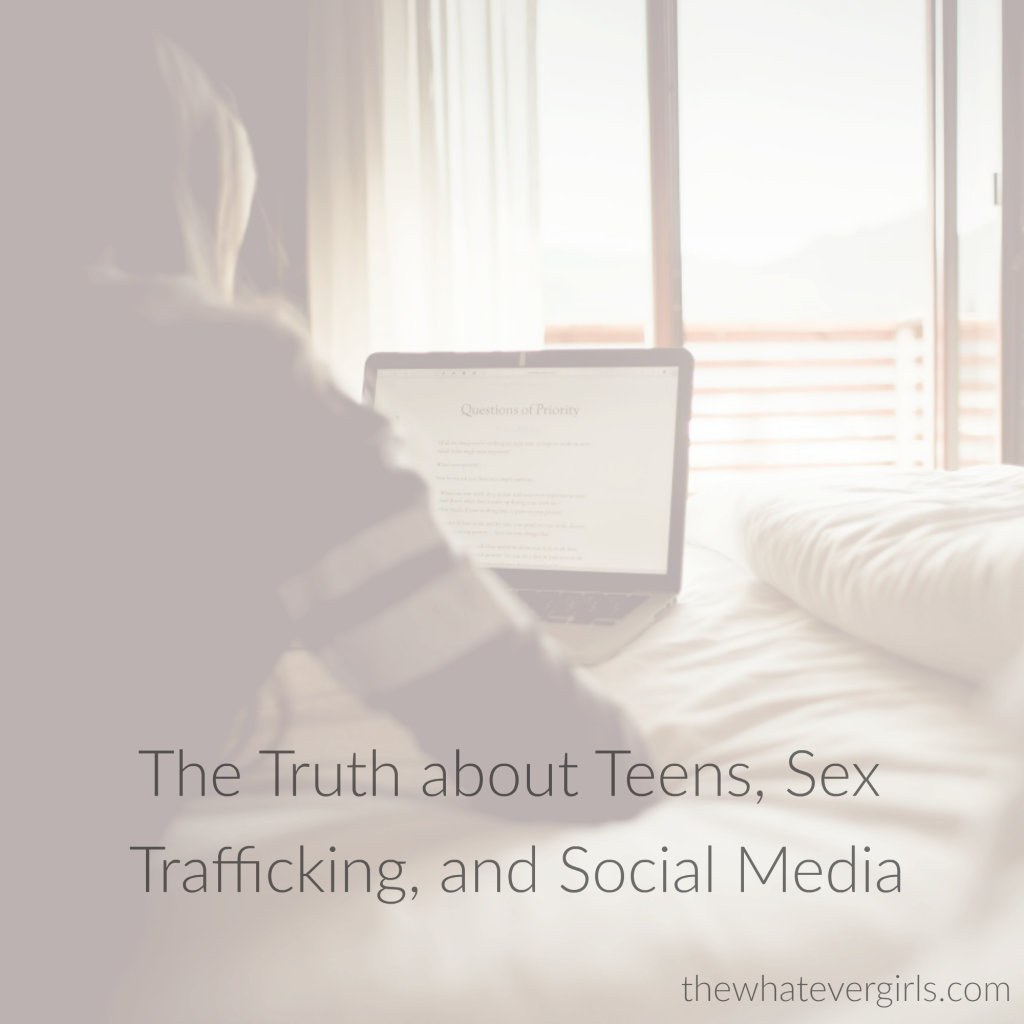 I recently attended a sex-trafficking training for care providers working with kids. Though I’m a school counselor and Licensed Mental Health Counselor, I learned childhood sex trafficking is not just a counselor’s issue. It’s a parent, issue, too.

The presenters told us that sex-trafficking is every community in the United States. Rural. City. Suburb. Commercial child sex knows no boundaries. It applies to kids you know.

What I learned broadened my scope about potential victims.

Did you know these facts about teens, community, and sex trafficking?

-The average age of kids entering sex trafficking is 12-14.
-Commercial sex with children is now the 2nd largest criminal industry behind drugs.
-1 in 3 victims are recruited within 48 hours of running away from home.
-83% of US victims are US citizens.
-The largest majority of victims have been sexually abused or molested.
-Kids are often recruited by other kids involved in sex trafficking, usually of their same gender.
-The internet and social media are prime places where recruiting and grooming happens.
-Girls involved in sex trafficking have “trauma bonds” with their trafficker, who they consider their boyfriend.
-Social media plays a big role in finding and grooming victims. Instagram, Snapchat, Kick, Twitter, Whisper, Facebook–all are used to scout victims. A complete guide for social media and sex trafficking is found at Love146–an organization with valuable resources for parents and teens on sex trafficking.

What do traffickers look for online? “I hate my mom,” “school sucks,” and similar statements. Remember, the average age of those entering trafficking are kids 12-14, who often share their emotions on social media. Groomers look for the vulnerable and know how to earn their trust.

If they want love, they’ll be their boyfriend.

If they need a place to live, they’ll give them shelter.

If they are lonely, they’ll become their friend.

If they want to father, they’ll become their protector or “daddy.”

If they are poor, they’ll provide them the dream of status and material goods.

The striking truth about victims of sex trafficking is that they’re in our communities, churches, schools, athletic clubs, malls, and neighborhoods. Victims don’t self-report. They are in love with their perpetrator because he provides things for them and makes them feel significant.

As a parent, it’s something to take seriously.

What should you do?

Educate yourself on the dangers of social media. Again, Love146 is a great website devoted to this.
-Talk with your daughters and sons. Even if it sounds weird.
-Be aware of your tween or teen’s moods and emotional presentation.
-Question unhealthy relationships with boyfriends–especially those exhibiting power and control.
-Be aware of new, material goods purchased for them by friends or boyfriends.
-Be involved in their social media. Teens can have multiple Facebook accounts of which you may not know.
-Be on the lookout for friends or kids in your parenting circles who may be a victim.
-Girls who say they’re “modeling.”
-Kids who are overly tired, malnourished, or have neglected healthcare.
-Teens with tattoos which indicate branding or have the term “daddy” on it.
-Kids with severe anxiety, memory loss, lack of trust, sadness, withdrawal, suicide, or hopelessness.
-Kids with signs of physical abuse.

A couple of years ago, I talked with a former victim of sex trafficking at a faith-based conference. She briefly told me her story. She was raised in the church, was in a youth group, and was trafficked by her brother to his friends and others.

Trafficking isn’t something confined to the brothels or slums of southeast Asia. It’s commercial sex with a child and it’s in high demand in the United States. Its victims and consumers are in our neighborhoods.

We need to be aware and engaged on all levels.

Take it seriously. Familiarize yourself with the facts, educate others. Share this article.