I had no idea such a frenzy would ensue after posting proof of my Saturday-slacker parenting practice a few weekends ago.

With almost 100 likes, many comments on Facebook and several others who mentioned it in-real-life, it got me thinking about why this picture generated such a buzz: 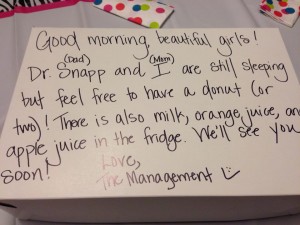 To give you some background information, my daughter had a few girls spend the night this past Friday.

But here’s the thing: Saturday’s are mine.

As in I sleep until I wake up and if I want to take a nap later in the day, I do. Without guilt.

It’s true that it’s only been a recent thing so if you’re reading this and your children are six months old and two, you won’t be able to pull this one off—yet.

I give and give and give throughout the week. I know you do, too. So often, I am moving from point A to point B at a breakneck pace, helping with homework, working on projects, and assisting with bath time. Making meals. Finding lost toys. Comforting skinned knees.

Don’t get me wrong—I am so thankful to be a mother.

But if we take the time to refuel, to fill our own cups, to give ourselves permission to not cater to our child’s every whim, a funny thing happens.

We get more rest. Our marriage improves. Our children begin to realize the world is not all about them. We get back in-touch with who we were before we decided to become a mother.

We start to get our lives back. Ever-so-slightly. And there’s something so resuscitating about that.

Of course, this takes some boundary-setting, but it’s worth it. It might take time for all the parties involved to get the swing of the new boundaries, but don’t throw-in the towel before you taste the fruit, sisters.

You should probably know, too, that I am not preaching at you from a platform but rather sharing what I’ve learned the hard way from a bench you’re sitting upon as well.

I am not the Shell Answer Man of Parenting. Far from it. I’m right there in the trenches with you.

But I do know we’re all in this together and while we do have a manual, it’s true that we need to bounce ideas off of each other now and then.

So if your kids are old enough (as in at your oldest is at least five or six and your youngest is a later three or four), I encourage you to do something that is for YOU. Without guilt.

Because here’s another funny: my kids LOVE Saturday mornings, too. They get to eat cereals like Trix or donuts or Entenmann’s Little Muffins. I pre-pour their milk, OJ, or apple juice so they just have to open the refrigerator and turn on cartoons on Netflix.

And neither can I.

OH – and it doesn’t make you a bad mama. It makes you a smart mama. It makes you more like Jesus, who knew the importance of rest and wasn’t afraid to stop giving to others to get it. He listened to His own bodily needs and understood His own limitations as one with flesh and as a result, was able to fulfill what God had called Him to do in the way He was called to do it.

It’s true that it’s hard to love your neighbor as yourself when you’re own cup has been empty for years.

So fill it back up. And enjoy. You deserve it, mama. No guilt.