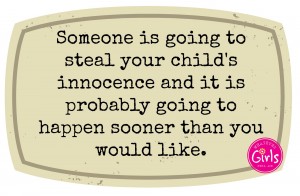 Who will steal your child’s innocence? It’s a hard question for any parent to answer.
I spend the majority of my day fighting the growing sex industry in our country. Day after day I read articles or hear personal stories from survivors of how lives have been destroyed by our nation’s growing appetite for sexual perversion. It can be a bit overwhelming at times. Just when I think I’ve heard the absolute worst out there, I learn of another story or case that blows my mind.
Prior to joining the anti-trafficking movement, I worked in student ministry and women’s ministry. I spoke at several church youth groups, youth camps and in the schools as a speaker for the Fellowship of Christian Athletes. It is because of my work with students that I became wrecked by some of the current statistics:
Polaris estimates the average age of entry into the sex trade for female victims is 12-14. Studies show the average age of entry for boys into the sex trade is 11-13.
“As of October 2014, the CyberTipline has received more than 8 million reportsof suspected child sexual exploitation since it was launched in 1998. Suspected child sexual exploitation can be reported to the
at 1-800-843-5678.””1 in 7 endangered runaways reported to the National Center for Missing & Exploited Children in 2013 were likely sex trafficking victims.”
Shared Hope International states at least 100,000 American children are being exploited through pornography or prostitution every year.
I couldn’t just walk away and go back into my quiet little suburban bubble. I had to speak out. I had to raise my voice for those who have been silenced [Proverbs 31:8].
I know there are many parents who push back when someone suggests they share my book, Rescuing Hope, with their child. Some youth pastors are concerned that parents may not want them to address this topic in their churches. Some school administrators want to shy away from presenting this message to their students for fear of parental backlash. My response to these parents is always the same:
Someone is going to steal your child’s innocence and it is probably going to happen sooner than you would like. It can be you, in a controlled environment, such as your child’s school or youth group, or it can be the trafficker trolling social media looking for his next victim. Either way, it will happen. One way you get to choose, the other you don’t.”
I can totally relate to the fear this topic brings to the table. I’m a parent. I fully understand. However, sticking our head in the sand and wanting to look the other way will not make this issue disappear. Trafficking is the nation’s fastest growing form of organized crime. It is not a respecter of persons. Victims and potential victims come from every demographic imaginable. Pimps also don’t look like what you’d expect. In many cases, a child trafficker can be a fellow classmate.
Proverbs 22:3:
“A prudent man sees danger and takes refuge, but the simple keep going and suffer for it.”
This crime is often called the crime hidden in plain site. The way we shine a light on it and uncover it is by talking about it. We need to discuss it with our children and those around us. We need to raise awareness so our conversations become catalysts for action. God entrusted our children to us. It is our responsibility to educate and equip them for the world they’re growing up in, even if it means stealing their innocence.
Who will steal your child’s innocence? Will it be you or will you leave it up to a stranger?
January is National Slavery and Human Trafficking Prevention Month.
Visit Susan’s website for more information about sex trafficking in America and how you can #bethekey.
#SocialMedia #SexTrafficking #Pornography
Share
Pin
Email
Print